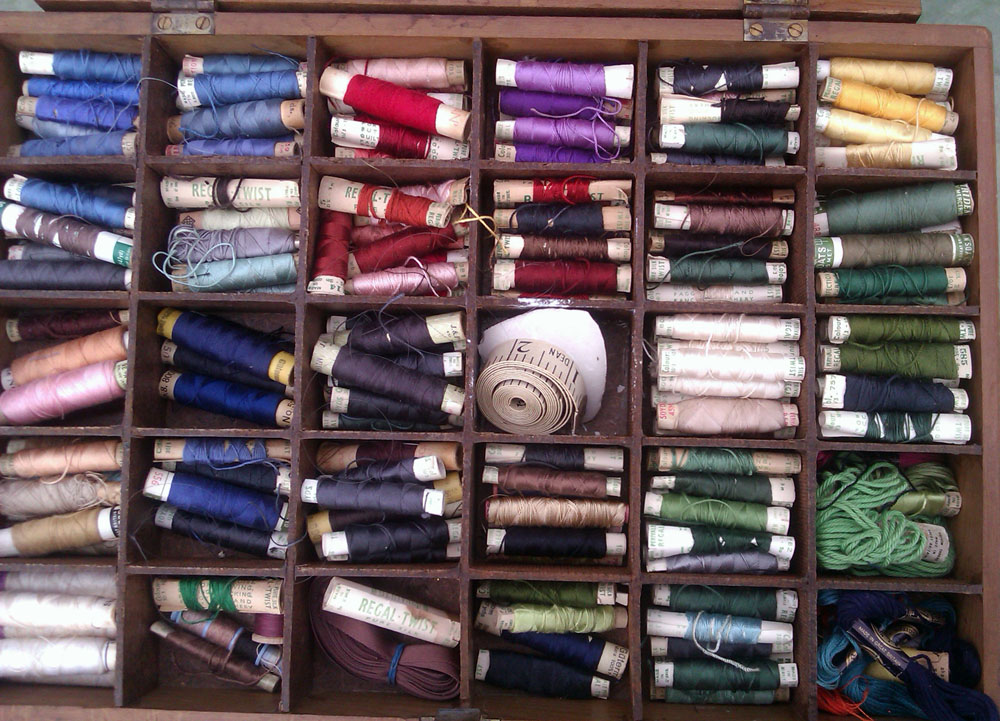 I am in Melbourne with my sister Ant. We are on our way to Canberra where we’ll be spending two months at the National Film and Sound Archive. Right now we’re spending the weekend with our brother Richard and sister-in-law Marina.

Last night we swopped cloth and textiles stories with Marina. Like Ant, she is an artist who re-purposes textiles. This morning she got out a box of beautiful embroidery threads that an elderly friend gave her, wanting it to go to a good home. The friend aquired it in the 1960s but the paper spools on which the silks are wound look like they date from around the 1940s.

I was asking Marina this morning about her clothes when she was a child in Croatia. She told me that her great aunt was a seamtress and pattern cutter during the socialist period and made clothes using patterns she adapted from western magazines sent by relatives. She would ask the kids what shape garment they wanted – puff sleeves, or belted waists for instance – and the kids would be involved in the design of their dresses.

Both Ant and Marina incorporate family associations into their work. Listening to them talk about the memories attached to their materials made me think about the connections between improvisation and loss. While improvisation is about moving into the future it also incorporates the past – past traditions, materials, people and skills. The experience and trauma of loss can induce repetitive circling round painful experience, but I think a diagram of improvisation would have a spiralling rather than a circling movement – able to gather up past experience – and by implication loss – but wary of getting trapped in repeating loops of loss and open to change and forward-facing movement.