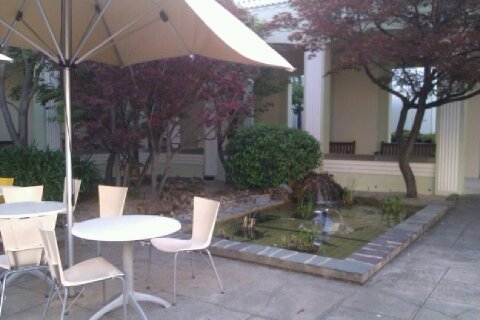 Yesterday Ant and I arrived in Canberra at the National Film and Sound Archive where we will be spending seven weeks on the Scholars and Artists Fellowship programme. Our research focuses on improvisation in art and life, approached through some of the moving image and sound materials the archive holds on WW2 austerity.

In the last couple of years Ant has been working with materials that are immediately available to her. She began using remnants from family life after going to a conference about basketry. Baskets can employ very similar techniques but show great variations of form because of the differences in locally available materials. My interest is in the improvisation involved in certain artforms and the way the fluid, contradictory, contingent situatedness of experience is part of both creativity and social life.

At NFSA we were met by Dr Jenny Gall, Co-ordinator of Research Programmes who gave us a tour of the archive and showed us around the residence where we are staying. NFSA is next door to the Australian National University campus and there is a lot of neighbourliness between the two institutions.

Walking round campus we passed through the corridors of the art school and decided to look up Valerie Kirk who is head of Textiles and a friend of MMU’s Alice Kettle. We asked Valerie if she might be able to find Ant a small space to work in and she seemed hopeful – we will meet with her next week to discuss our research with her and also follow up some conversations she has been having with Alice about another project.