When we arrived at the archive almost four weeks ago, a shelf of DVDs and video tapes were waiting for us in our large, well-equipped work room. While we were preparing our application, Ant had done some searching for films using the online catalogue and we thought of these awaiting titles as a useful starting point for our project. As it turned out, Ant’s search had been very thorough and there was very little lurking in the archive that had not been on our original list.

We had no idea what the films would be like. The collection is currently being digitised but it is a slow process and we had seen nothing of the footage until we put the first tapes and DVDs into the machines on our desks.

Our proposal is named after one of those titles. “Mr Dedman arrives wearing the first Victory Suit made in Australia” is a 3 and a quarter minute information film made in 1942. 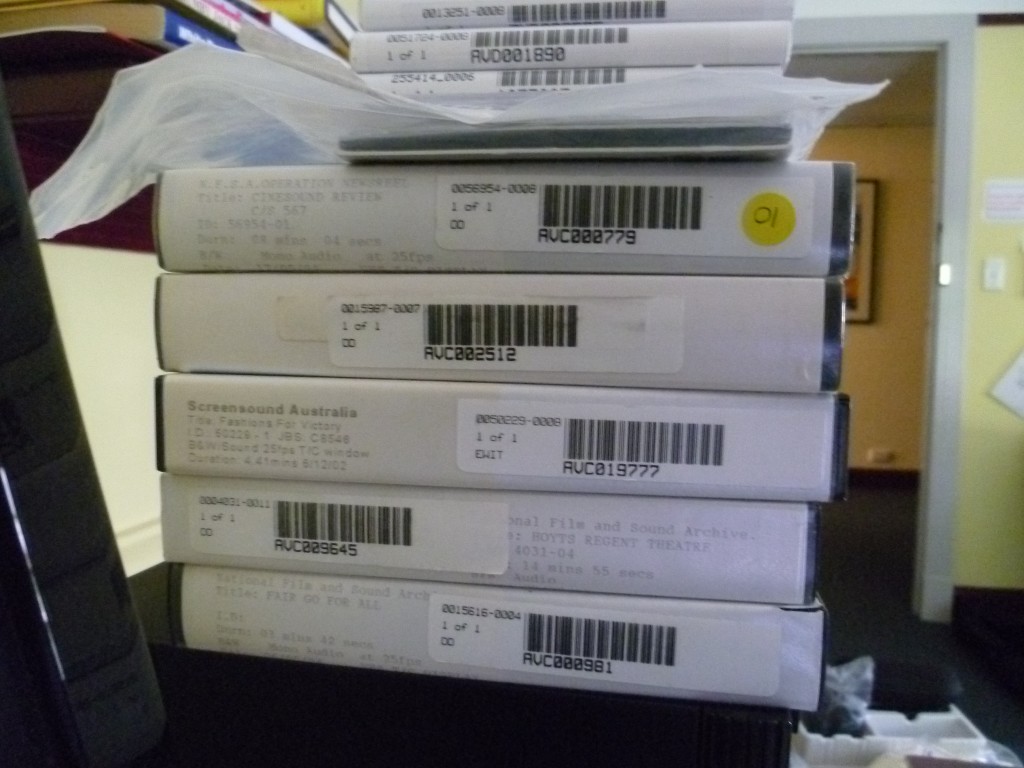 In the film, John Dedman, the Minister for War Organization of Industry, is seen arriving from Melbourne in a car, entering his office and as the commentary tells us, being “immediately interviewed.”

The film appears highly scripted. Dedman sits at his desk answering questions from journalists who seem docile and well-rehearsed. He explains that although Australian textile factories are producing more than double their pre-war output, this extra material together with the original production is needed for the fighting services. Further increases still are needed beyond this, but without increasing the workforce.

“So is winning the war!” retorts Dedman in what seems to me a passably good performance.

“And how about the Victory Suit Mr Dedman?” asks another journalist.

Dedman spins round his office chair, stands up and turns back to face the camera. He carefully points to the various details of the suit as he elaborates on the labour and material savings of the Victory Suit:

“No vest. No trouser turn ups. No buttons on sleeves. That may seem a trivial change. But each of the old fashioned button holes use up one extra yard of thread. That means a saving of 8 yards on every suit.”

Andrew Spaull in his biography John Dedman: a most unexpected labour man tells us that Dedman had consulted The Master Tailors Association in Sydney for advice, but that the savings he claimed were being made by the suit were quickly questioned by people from a variety of quarters. The Victory Suit was not a success for a whole host of reasons, including that Dedman “was no rugged, elegant male-model; perhaps none were available because of manpowering, and the suit seemed to fall off his sparesly framed body. His short-lived modelling career was judged to be a failure.”

But despite the scripted nature of the film and the short-lived success of the Victory Suit, it is the film’s performativity and sensuous tactility that prompts me to wonder about an aspect of clothes rationing I had not considered before.

Although I have read about clothes rationing during WW2, witnessed the contemporary revival of Make Do and Mend and heard about wartime clothes from our mother, it wasn’t until I saw this film that I thought through the implications of clothing and textiles being placed in the political spotlight. Film allowed me to imaginatively experience the unusual juxtaposition of the trappings of authority and government – the confident minister, the office full of journalists – and the familiarity of supposedly humble cloth, buttons and yarn.

The intimate as well as the public dimensions of our lives are bound up with clothing, fashion, our bodies and cloth. During times of ‘total war’ these are brought from the margins of public life to the centre stage. Something that had been peripheral to Australian government policy (having been left previously to market forces) became central almost overnight.

Film has the capacity to capture the sensory details of changes as they happen and are announced – the cut of a garment, the throng of people asking questions, the slightly hesitant way in which Dedman carries himself. This is film’s power and seductive beauty – and perhaps for these reasons (as well as others) has changed politics.

Watching the film the first time round I didn’t know anything about Dedman’s popularity or unpopularity or whether his Victory Suit was a failure or a downright success. For that I needed to read the work of Spaull and others and delve around in several more archives – the Australian War Memorial in particular.

A really enjoyable part of this research for me has been the piecing together of film with other forms of evidence and interpretation such as letters, interviews and historical analysis.

And there’s only another three and a half weeks left!