We’ve been home for several months now, but the thinking and making we began in Canberra hasn’t stopped.

Towards the end of our residency things got very intense. We had to get everything finished for the presentation that fellows are required to do at the end of their residencies. Then there were books to finish reading and a film to begin to edit.

Antonia completed the pullover she had been making throughout the residency (see the film below) which went on display in the foyer of National Flm and Sound Archive with a canister of knitted film bearing the names of the films we had watched in Morse code interspersed with other messages. Several people who had helped us with our research and who we had interviewed came to the presentation which was lovely. Then a couple of days later we gave a paper to the international Visible Evidence conference, held this year at NFSA with involvement from Australia National University.

A short while after getting back to the UK we started work on an exhibition about the Australian research. It opens next Monday at Special Collections, Manchester Metropolitan University (Monday 15th 2013). One of the prize exhibits (in my unbiased opinion!) is the dress by Antonia, started in Canberra, and finished in the UK.

She has called it ‘The Solace of Stitch’. Its made of pre-cut fabric pieces from an unfinished dress making project bought from Fyshwick Salvos Store, a charity shop in Canberra, with thread from winter tights, socks and cardigan and various found threads. 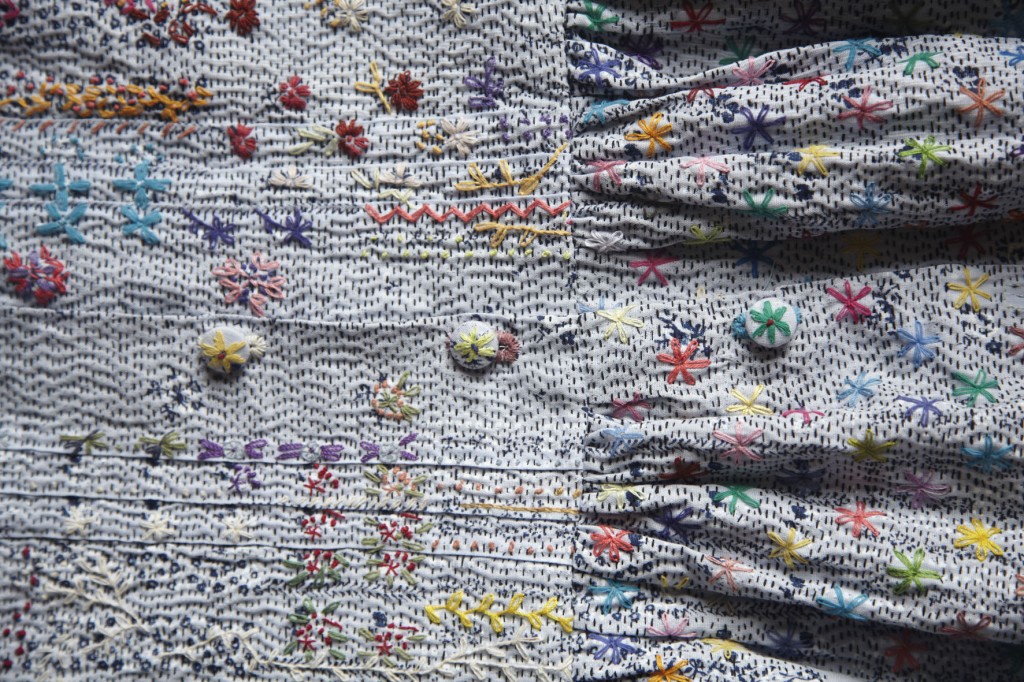 She says she thinks of it as a visual novel, because of all the stories she told herself as she stitched it.

I’ve completed a 15 minute film called All That Was Old Is New Again.

I was lucky to work on the editing with a talented young editor and filmmaker Insa Langhorst. Insa was very patient and skilled and helped me translate my vision into a finished film.