In 2012 my sister Antonia Riviere and I were visiting fellows at the National Film and Sound Archive of Australia. We were there researching Australian clothes rationing during World War 2. We were interested in how film had been used to support the government’s austerity drive, whether Australians had been encouraged to ‘make do and mend’ like their British counterparts, and how we could use our own making to explore these and other questions. 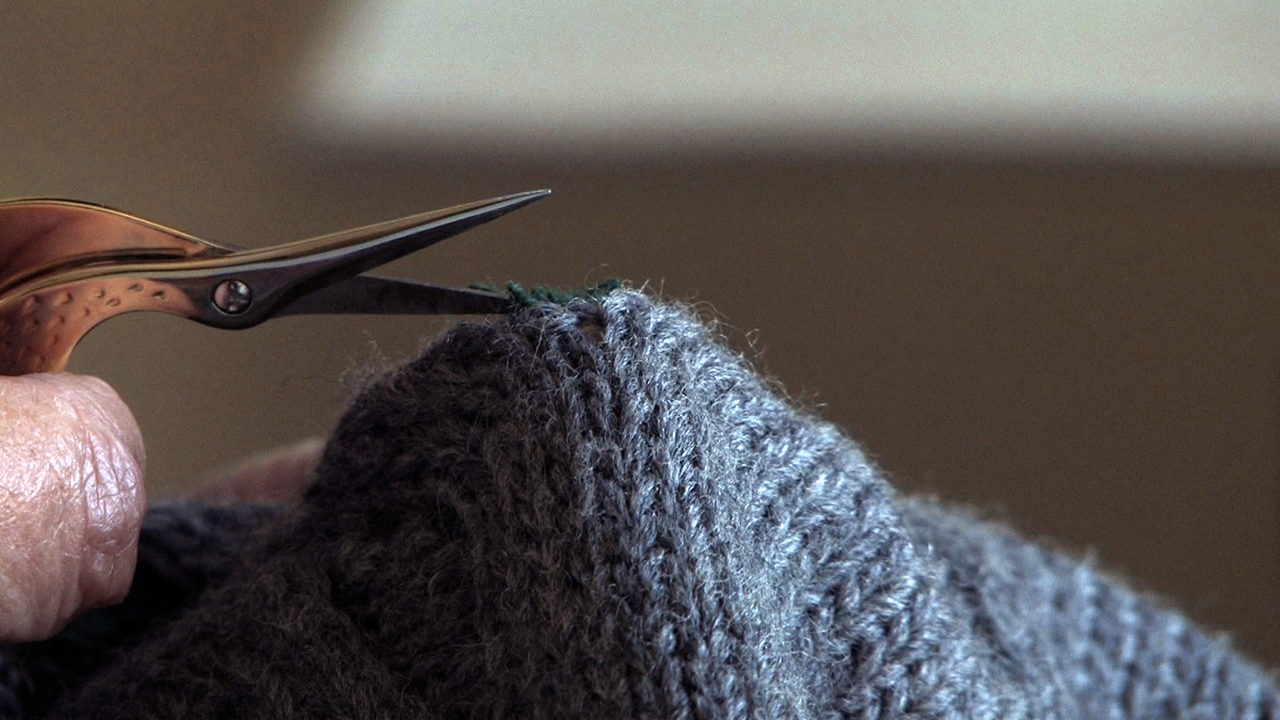 Here are two speeches about the  exhibition Mr Dedman’s Victory Suit, the first sent by Michael Loebenstein, CEO of NFSA where the research started, the second given by the artist Alice Kettle on the opening night:

“This is a message from Michael Loebenstein, CEO of the National Film and Sound Archive of Australia, to offer my warm congratulations to Amanda Ravetz and Antonia Riviere on the occasion of their exhibition opening at the Manchester Metropolitan University’s Special Collections Gallery.

In 2012 Amanda Ravetz, visual anthropologist, and Antonia Riviere, textile artist, spent two months at the National Film and Sound Archive of Australia as part of the prestigious Scholars and Artists in Residence program. Their collaboration, combining scholarly interrogation and practice lead research is an approach the NFSA has been proud to support.

It is gratifying to know that films from the National Film and Sound Archive are an important basis for the screening you will view tonight. I hope that for many of you in the audience the experience will move you to investigate the NFSA via our web site, or visit us when you are in Australia.

“There is something powerful and evocative about the call to Make Do and Mend, and it is timely in terms of today’s economic need for thrift and recognition of vintage.

In thinking about speaking today I turned the phrase around in my head since originally it was to make-do, the acceptance of nothing new with all the implications of loss, constraint and sadness. Then I realized by separating the words, it becomes an active invocation and series of verbs.

These words rely on invention and creative thinking. They are words which allow for the improvisatory, the individualistic and the eccentric. I am reminded of the fashion designer Vivienne Westwood starting her business through customizing T shirts on the kitchen table, a true eccentric. They are words which empower. In the act of taking apart, unmaking, you can pay homage to past history and the previous owner of a garment and create a newness, you can co-create. It is a powerful metaphor for almost anything in life.

In speaking to Amanda and to Antonia and reading their text in the catalogue the sense of 2 places, 2 impressions, 2 interpretations, 2 interconnected voices is very present, all suggesting something more, new potential, a new place formed through the improvisation of collected materials, memories, and reconstruction.

They speak of layering the inner and outer, the public and domestic, the 2 sidedness of things.

There are 2 continents and archival collections represented here, that of the National Film and Sound Archive of Australia which Amanda and Ant when to Australia to research. They show us  the British-made film In Which We Live: Being the Life Story of a Suit Told by Itself (dir. Richard Massingham, 1943). It is a quirky tale of the life, death and reincarnation of a suit. More than any of the other films they viewed, It focuses on the tactile, sensory and emotional aspects of needlework.  Sailors by the Shipload shows the ship the Autolycus leaving Australia for Portsmouth. While the commentary is upbeat,the pictures show sailors, lovers, mothers andchildren saying tearful goodbyes. The delicate bonvoyage streamers suspended between the sailors and their families on shore are as fragile as the connections they evoke.

There are the physical examples from Special Collections, and I think this show is a testament to the importance of the collection as an inspirational resource. We are so lucky to have it here at MMU and as a member of the Art School I have worked with the wonderful experts and sent students here frequently.

There are extraordinary examples of public propaganda of make do and mend,

They are so curious, and we laugh at them — 101 things you can do with a scarf — the implication in the archival material is that you can win the war with textiles and dress –  “be proud of your darns.” Design Historian Alison Slater based here, has contributed pieces from her collection in the far cabinet and Norwich Museum has lent some pieces from its collection too.

All of these contribute to the other side, and I’m not sure whether it is the inside or outside which is translated, mended, made and done by Amanda and Antonia.

In looking at their making, doing and mending, they use the mediums of film and of textile both central to the original make do and mend war time invocation. In Ant’s hands garments have become reborn in what she describes as a visual novel of imaginings of seaming together of someone and something and of herself. Amanda gives us a glimpse into these imaginings, as her films likewise are a seaming and mending of materials where she is making possible a new imagining. I kept thinking of the grammatical construct the continuous present.

An additional aspect which makes this work deeper, more intimate and firmly situated within the owning of identity, and of lineage is that Amanda and Ant are sisters. That does make, do, something more.

I am proud and honoured to introduce this exhibition. It is a remarkable exhibition which deeply, quietly but powerfully resonates. It is done by 2 remarkable women who have made a profound impression on me personally.

Amanda I work alongside, I learn from her, I see things differently thanks to her. We have recently worked together on a publication which comes out in June, so I know her capacity for watching, waiting, seeing and knowing with insight what the rest of us grasp at. She introduced me to Ant and I have come to know Ant’s skirt well as it was featured in our handstitch book and has been exhibited and hung by me in 4 exhibitions. For this book I was writing a piece about outsider art, which I won’t talk about since it is a whole enormous subject that I have become connected to. But Ant works at Barrington Farm in Norfolk, a creative centre for people with learning difficulties, one of whom Amanda has made a film about. They have both expressed the importance of this place where there are no preconceived notions to creativity, a place which is entered into with a sense of improvisation and as Amanda said to me framing a space in a kind of absent mindedness.

I also went to Australia last September to work at the school of art in Canberra, I had hoped to go with Amanda and Ant as the adopted sister, my name does after all start with A but they arrived shortly after I left. When I was there I went to find the film archive which was right next door to the textile department where I was working. I was excited to find the best café on campus and I told everyone about the arrival of the sisters, and I know how warmly they were received since I have had various reports back.

I said to Amanda when I saw her film it is a piece of knitting, equally Ant’s knit is a visual narrative. They have made the other sides of each other and both contributions seamed and seamed together with deliberation and yet completely seamless.”